New Zealand – We made it!

e are here on the other side of the world. We left for Orlando on Monday the 23rd. Our flight was at 5:30 in the afternoon. Courtney and Kyle both took us to the airport. This picture shows how excited they were. Courtney will be leaving on Wednesday to go to Canada so it was a bitter sweet goodbye and Kyle will be holding down the fort and tending to sweet JR.

we are waiting at the Orlando airport, the Orlando Magic were greeting and checking in passengers at the gate next to us. It’s was crazy loud but alot of fun to watch.

Waiting in Security line at LAX

Monday, February 23rd 8:30pm PST we arrived at LAX. What a ridiculous airport that is. We checked in and had a 2 hour wait until our next flight. We grabbed some food and waited.Monday February 23rd 10:30pm PST we boarded and left for Fiji. Steve took some sleepy pills and slept alot of the way. I slept lot too but thank goodness for airplane in flight movies.

We landed in Fiji at 6:30am Wednesday, February 25th. Yes we lost a whole day. We waiting another 2 hours at the Fiji airport before loading again for the final flight to Auckland New Zealand. Tired does not even come close to the way we felt. We still however have to get our rental car, find our way to the hotel in a very large city and do all this while driving on the opposite side of the road we are used to and being very sleep deprived. We did have a little difficulty getting out of the rental car parking lot but success, we made it to the hotel. Driving in Auckland is a little like driving in NYC. Lots of cars, lots of people. We found a parking garage since our hotel did not have parking, unloaded our luggage and walked the blocks to the hotel. We had not had a shower since Monday morning so that was the first thing on the agenda. The next item would have been dropping into bed and immediately falling asleep but since it was 3ish in the afternoon, maybe not. We decided to go find something to eat and waste a little time until WE COULD go to sleep. Auckland is very easy to walk. We went to the water and found a cute little restaurant directly on the water called The Crab Shack.

After dinner we went back to our hotel. Pajamas and a little tv……I think I was awake for approximately 8.2 minutes on the couch. Steve led me to bed and I woke up 12 hours later. Feeling better and ready to go. Stay tuned, here we go 🙂 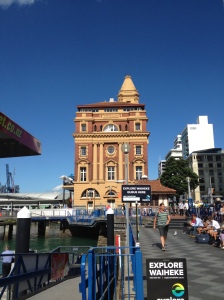 Elevators in NZ are called Lifts

Jesus lover 💜 Wife of Steve for 34 years 💜 Mom to 2 grown kiddos 💜 BB to grandsons Jack and Luke 💜4 years ago we purchased, Rescued and Restored a 116 year old farmhouse and we live together as a multigenerational household. Come follow our crazy. Isaiah 54:7
View all posts by Charmadawn →
This entry was posted in Adventures. Bookmark the permalink.

4 Responses to New Zealand – We made it!