The Old House had an extra added benefit when we bought it.

Now some people might have thought it was just an eyesore……which it was, but you have to look past the roof that looked as if it would cave in at any second and walls that had weeds growing through them.

Instead we saw potential!! 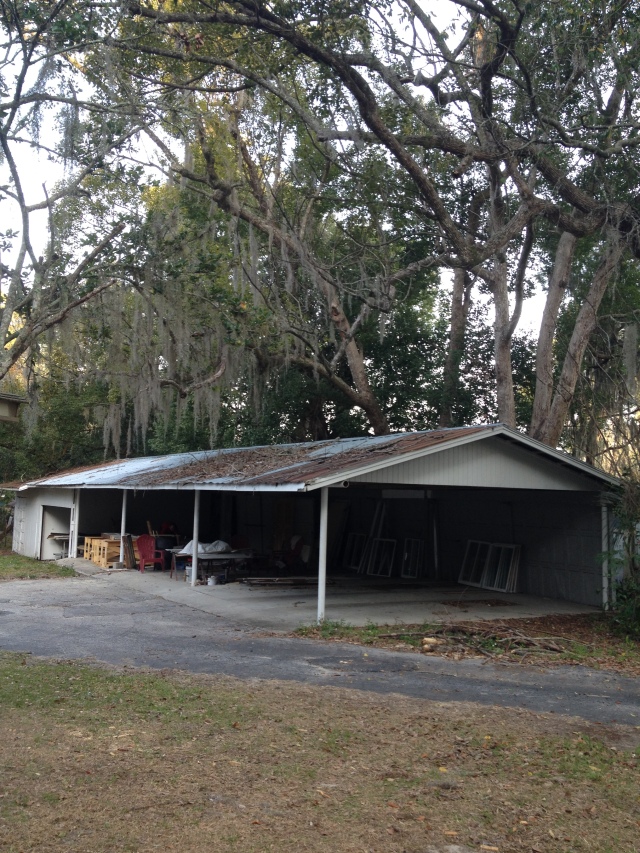 We are not blind. We saw the wall rot and the rusty roof.

We saw the uneven concrete floors and the sagging doors.

Yeah we saw it all.

The carport has always been Phase II and about 8 weeks ago, Phase II moved to the top of the list.

Good grief, you would think we could start an outdoor project in a month other than June.

Roof quotes were received. Wow roofers cost a lot!! But roofing is one thing this do it yourself family does not do.

Goodness gracious, with a new roof it will look brand new, right?

The old rusty bent up metal roof was removed.

Some pieces were repurposed into a friends chicken coop roof (I love that!)

Lots of repairs and many dollars added to the quote but a new roof was completed  and it looks great!

The carport was open on the end facing the street.

We (as in Steve) built a wall to close up the end so that everyone could stop basking in the beauty of all our junk. Cause we have a lot of precious junk.

I’ll be back later with more of the time stealing story.

And we are almost ready for garage doors!

Jesus lover 💜 Wife of Steve for 36 years 💜 Mom to 2 grown kiddos 💜 BB to grandsons Jack, Luke and Patrick Joseph 💜5 years ago we purchased, Rescued and Restored a 118 year old farmhouse and we live together as a multigenerational household. Come follow our crazy. Isaiah 54:7
View all posts by Charmadawn →
This entry was posted in Cinderella Project. Bookmark the permalink.